I knew that the Master Brewer from Shepherd Neame - Stewart Main - was coming to Stockholm Beer & Whisky Festival this year (just as he did in 2012). I've made some initial contacts with Dan at the Swedish importer Galatea to ensure that I'd be able to have some 1on1-time with Mr Main during his visit at the festival. During the early afternoon of the first Thursday I "bumped" in to him - at the Galatea-neighbourhood of the mess hall. He was more than pleased to sit down with me and answer a couple of questions.

We managed to find a table and a couple of chairs out in the "corridor", less noisy and more oxygen. Accompanying Mr Main was Chris Hole - assistant export manager of Shepherd Neame.
I had prepared 5 questions - but as always, for every question there is at least one follow up.

I began by asking him about his background - I had done some "research" prior to our meeting, but I haven’t really found anything much about Mr Main.

He started in the brewery-business 41 years ago in Edinburgh, Scotland. Moved to England in the mid-eighties and finally started working as the master brewer for Shepherd Neame eight years ago. 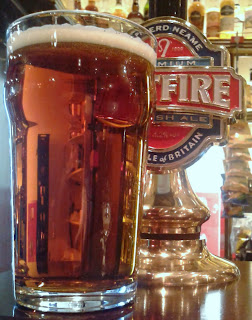 The fact that I used to love one particular beer from the brewery was one of my reasons for wanting to speak to Mr Main. And one of my questions regarded that specific beer - Spitfire. The beer was first brewed in 1990 in memory of the Battle of Britain that was fought in the sky over Britain during the Second World War. I asked about whether the recipe had any connections to beers that the people of Britain would have had drank during that specific time-period - 1940. Even though Spitfire is a ”traditional" English bitter ale it doesn't have any direct connections to any beer brewed in the 40s. The only beers from Shepherd Neame with that kind of historical recipes are the ones brewed within the "Classic Collection-series".

My next question was regarding something that is - outside of beer - one of my main interests, environment! During my research I've found some very interesting information on the breweries homepage regarding their work on sustainability. The brewery has a major commitment to making their whole organization as environmentally friendly as possible. Their barley and hops are grown within a mile of the brewery. But not just directly in the brewery - the transport of their products and employees (free bicycles are offered). The vast number of pubs are everybody are expected to follow a number of rules regarding organic and/or locally produced food. All tea and coffee served in their pubs are fair trade-products. The only organic beer brewed under the Shepherd Neame-label is Whistable Bay Organic Ale. 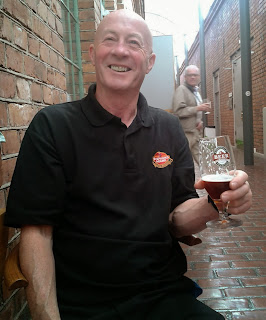 Is Shepherd Neame a Craft brewery? They are not a "big" brewery per se; they work on a somewhat small scale. Stewart seems to enjoy the booming beer and brewery-scene in Britain – but no direct collaboration are planned. They can handle both big and small batches by themselves, and do some contract-brewing for Samuel Adams and Asahi.

What about the future? Any new Beer in the CC-series coming up? One very exciting beer is in the making!
Since my talk with Mr Main I've learned more about this very interesting exciting project. Mr Main has been spending some time with my favourite Swedish brewer - Emil Lindén - at Sigtuna Brygghus. Making an English style Barley Wine, finishing of around 10+% abv. This will make it not only the first beer Shepherd Neame has brewed away from its own site but also the strongest. Further info on this project is available at beersweden.se

Some of this did not occur during the specific interview; more information was acquired during the Shepherd Neame Master Class led by Stewart Main later that same evening. Sadly I didn’t take any pictures during this master class. Mr Main is a very energetic speaker and also very passionate about the subject of beer. He speaks rapidly with his distinct Scottish accent, with a great sense of humour. He led a group of 9 curious listeners through the testing of 4 bottled beers from Shepherd Neame - Whistable Bay Organic Ale, Bishops Finger, IPA and Double Stout. The last two is in the Classic Collection-series. I've tried all of the previously and the IPA and the Double Stout is very nice.

The Day after Galatea had arranged for a little Shepherd Neame-event – hosted by Stewart Main - at one of many new pubs in Stockholm - Bishops Arms in Gamla Stan (Old Town). During this event I got to try a new brew from Shepherd Neame – Whistable Bay Blonde – I’d like to try some more of that one – very nice. I even tried a full pub-pint of Spitfire - haven't done that for quiet some time. I don't know if it was the good company or just me - but it tasted awesome! 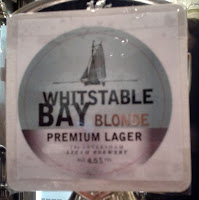